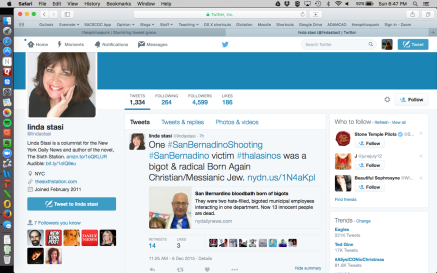 If you haven’t read Orwell’s 1984–you really should–this is a species of what Orwell referred to as “thoughtcrime.”

This set of thought patterns is based on the conviction that it’s not behavior that makes people virtuous; it’s their adherence to politically correct policies.  To wit: what you think about Syrian refugees makes you virtuous, regardless of how you behave.

They’re saying that the way they think about that particular issue is the only way to think about that issue.  Heterodoxy is stupid, or wrong-headed, or even dangerous, or even damaging to the thinker and the people around him/her, … and even potentially criminal.

Thoughtcrime, in other words.

Here’s the thing.  Heterodoxy is not stupid.  In a free society, it’s required; if there’s no heterodoxy, there’s no freedom, by definition your society is not free.  That’s why the attacks on the first amendment are so pernicious, so dangerous.